CEO FORUM INTERVIEW: “By 2030, EDM will have become a smart utility whose services and products exist in every household, all corporations and enterprises across all of Mozambique”

1)      Let’s start with some background on EDM, there is a proud history there.
Indeed, EDM does have an extensive and proud history. The corporation was created in 1977. Our mandate from government covers the entire spectrum of electricity products and services, and these include the following:

Our electricity generation capacity amounts to more than 2600 Megawatts (MW). Our transmission network consists of more than 5,000 kilometers of high voltage lines, and we currently have about 3500 staff. 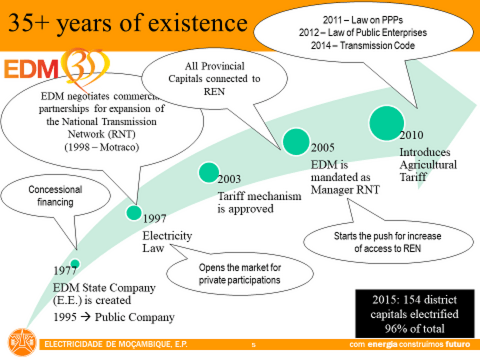 In late 2015, we embarked on a process of profound transformation because our mission changed fundamentally. A key pillar of our mission is to assure universal access to electricity in Mozambique by 2030. Our current level of access is 28%.

Our challenge remains daunting however (i.e. connecting millions of households in 13 years!). This is fundamentally the inspiration for our transformation. Our challenge is not the adjustment of current structure and practice to be able to accommodate evolving changes. We need to transform so that we can meet unprecedented challenges.

2)      What does your role entail?
I am the first CEO to be invited to lead the corporation from outside the company. This move by the government signals the desire and intention of the shareholder to overhaul the operations of EDM. There are many critical challenges. The first of these is to transform EDM into a credible, self-sustaining and competitive utility. We need to power and light up Mozambique using all available resources. Another challenge is to position the country as a regional hub in the generation and commercialization of power in the Southern African region. Our efforts have been directed towards laying the foundations for meeting these key goals. We are receiving feedback, which seem to support the fact that our efforts are not misdirected.

For example, EDM was ranked second overall among the top 100 largest companies in Mozambique by KPMG in 2017. The significance of this ranking is that EDM placed 9th in the same category in 2015.

In 2017, The Blue Bird Club, a youth-based civil society group in the city of Beira adjudged EDM as Company of the Year. I was as CEO of EDM, awarded the recognition of Economic Personality of the year. The prerequisites for this award were leadership and business management. I also received the African Leadership Business Excellence Award, from the Africa Leadership Magazine in April 2017. This was specifically in recognition of the ongoing transformation process in EDM.

Examples of the key foundation steps which we have undertaken are the establishment and internalization of the Ethics code, design and implementation of a new organization structure, and the novel policy of selecting Executive Directors through an international selection process thus ending the historical approach of hand picking the executives by the politicians. In addition, the number of directors and senior advisers was reduced from 75 to 35 with 26% of the new directors being female. This is a significant improvement on the past when less than 7% of the population of directors/advisers was female.  Our revenue has also increased from US$ 150 million to about 500 million over the past two years. The government also continues to provide unflinching support in the movement towards an economically viable tariff regime with the expectation to reach cost-reflective tariffs by 2019 (tariffs had been frozen for 10 years and were well below cost). We still have much more to do. However, we believe we are moving in the right direction.

3)      Which of your current projects are you most excited about? How will these projects change lives?
Our medium-term vision is electricity in every household, and in all enterprises by 2030 and making EDM a diversity and inclusive organization. We are therefore focused on implementing the following transformational objectives by 2030:
1. Achieving Universal access to electricity
2. Transforming Mozambique into a regional energy actor in southern Africa
3. Achieving gender equality in professional and leadership participation.

We are therefore concentrating on ensuring appropriate and sufficient generation and transmission capacity. I am excited about one of our projects which is the first Combined Cycle Gas Turbine (CCGT) power plant in Southern Africa. This is a 400 MW gas-to-power plant with an associated 400 kV transmission line. The is the Temane-Maputo power plant and line consisting of about 600 km. In May 2018, we will commence our first Photo Voltaic (PV) plant in Mocuba. The installed capacity will be 40 MW. Another group of interesting projects are the transmission interconnections between Mozambique and Malawi; Mozambique and Zambia, and Mozambique and Tanzania. There is also the construction of the Caia–Nacala 400 kV transmission line. These exciting projects will be key in effectively turning Mozambique into an electricity hub in the region. They will also transform living standards for the better.

Internally, we will be overhauling our procurement systems and practices. We will also revamp our financial and asset management procedures so that we can establish an efficient, transparent and professional working environment. We will also pay special attention to the challenge of technical and non-technical losses, so that we can reduce these to internationally acceptable levels.

4)      What are the main challenges to the power industry in Mozambique, and what opportunities are there for investors?
From the context of investors, the main challenge is that investments in energy are for the long term. The sector also requires in-depth technical knowledge. In this regard, we will only be able to attract a special type of investors. Such investors would be Individuals and corporations who are genuinely concerned about development, and who are also interested in long term partnerships. Mozambique is a relatively “young” country. It is however an emerging and vibrant country with an enormous and varied pool of natural resources. The country is therefore putting in place investment friendly policies especially for the benefit of foreign investors and partners.

We will need partners who will help develop infrastructure in Generation, Transmission, and Distribution both in the short as well as long terms. It will be especially challenging to ensure adequate, reliable and resilient transmission infrastructure across the country. This is because Mozambique covers a relatively large and long territory with requirements for long and extended transmission lines. We are now in the process of completing an electrification strategy which will consider the appropriateness of the mix of both on- and off- grid solutions.

Also, and as a critical consideration, it will be necessary to establish an effective and fully functional regulatory board. Primarily, this body will ensure the introduction and management of full cost reflective tariffs. It will also ensure continuous provision of reliable and efficient supply of electricity to the general populace, as well as to the economy in general.

5)      How important is renewable energy in Mozambique’s energy mix?
In 2017 alone, Mozambique’s peak electricity demand reached 1,850MW. Demand in the entirety Southern Africa region has also peaked at 38,897MW. Especially in the rural areas (and therefore for the vast majority of the population) these demands have been historically met by tapping into traditional sources such as wood or charcoal. In 2011, these sources accounted for 64% of energy production, and 77% of final energy consumption in Mozambique. This traditional cannot be sustainable in the long term.

This is where the exploration and exploitation of Renewable energy comes in. Renewable energy constitutes a win-win approach which contributes to increased energy access as well as energy security. This is especially the case in Mozambique where the major sources for producing renewable energy (Sun, Wind, Hydro, etc.) exist in abundance.  The renewable energy industry will also serve as booster for economic growth, especially in an era where escalating costs, ageing infrastructures, and growing populations constitute major challenges to development.

For EDM therefore, renewable energy will become the ‘new normal’. EDM has created a new Directorate for Renewable Energy and Energy Efficiency. A renewable energy strategy is being developed. In the new Integrated Energy Master Plan, we expect to grow the share of renewable energy up to about 20% in the next 25 years. This translates to about 1200 MW of power generation. Two solar power projects (41MW each) were approved recently. Construction on the first project commenced in March 2018. It is expected that the new plant would commence supplying power in the first quarter of 2019. We look forward to working with investors and partners in the areas of energy storage as well as in other renewable energy technologies.

Many international and bilateral partners are cooperating with EDM and the government of Mozambique in this emerging field. For example, and under the Public/Private/Partnership scheme, EDM and some companies have initiated feasibility studies in several locations with potential in renewable energy. On-going studies include three Wind Power Plants in Namaacha, Manhiça and Cahora Bassa (each producing 11 MW of energy), and two PV Power Plants in Cuamba and in Dondo, each producing 30 MW. All these projects are planned for grid integration. The EU is also supporting the establishment of a Renewable Energy Feed-in Tariff (REFIT) and Resource Center. A Renewable Energy Auction Program was also launched in September 2017 with the aid of the French government.

6)      How important is regional cooperation in your view?
Regional cooperation is a fundamental requirement not just for Mozambique, but also for all the countries in southern and eastern Africa.  Fortunately, the appropriate forum and infrastructure already exists through the Southern Africa Power Pool. We need to work more steadfastly in developing and refining the accountabilities and programs of SAPP. An effective SAPP will assure energy efficiency, energy security, and encourage political stability across the region.

7)      What is your vision for the sector?
As already noted, we embrace the vision of electricity in every household and in every enterprise by 2030. We will work to achieve this vision and ensure that EDM becomes a smart utility whose services and products exist in every household, and in all corporations and enterprises across all of Mozambique. EDM would also be recognized as a flagship ‘smart’ utility with clearly defined leadership and functional roles within the Southern African Power Pool.

We expect EDM to play a pivotal role in lighting the path of the transformation of Mozambique.

8)      What are you most looking forward to at the CEO Forum?
This opportunity must become a refreshing fountain of ideas and inspiration for all participants. I expect us to learn more about each other. We must be able to share knowledge and practice across corporations, suppliers, and partners. At the end, we should each leave more energized than we were, on the first day of the Forum.

9)      How important is it for utility executives on the continent to gather like this?
Very important.  It is essential to be able to step back from our daily pressures and concerns so that we can look at the larger picture from the perspective of an interested observer. We should have forums like these periodically.